Surely you have already heard an expression such as “if you want to live, know how to spin”. Many see it as a guide to action, but not everyone does it differently. Some people think it’s necessary to work hard, while others associate it closely with another well-known expression which, in a decent interpretation with the loss of rhyme, sounds like “if you don’t cheat, you won’t”. you won’t live”. In ordinary life, we want to meet these as infrequently as possible, but they are often overtaken by those who want to put their phones in order. We have found an example of such a flagrant deception which could not go unnoticed. Now I will talk about it. 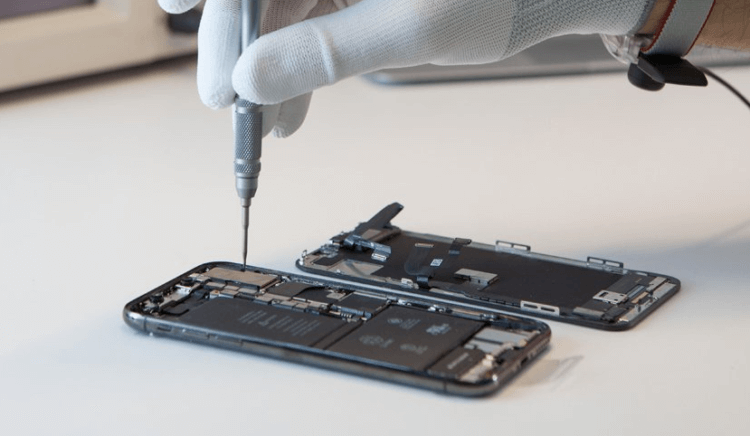 The iPhone can only be repaired under good conditions.

The information was shared with us by our friends from Apple Pro, who at first didn’t even want to be mentioned in the article, but at the end I’ll tell you why it was impossible without it. I also note that we deliberately concealed the seal and other information of the person who provided the services described below. We do this because we do not have the right to disclose its data. At the same time, whether or not to believe the story is entirely up to you. My job is to let you know and warn you about this, remembering that you need to find out in advance all the details of what will be done with your phone.

The reason for writing the article was the call from one of the clients, who said that he received services for almost 17,000 rubles. The most interesting thing was hidden in the wording on the receipt. Let’s sort this in order. 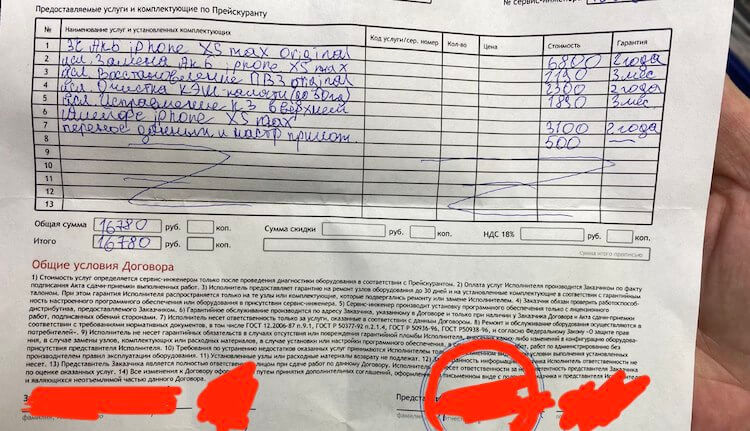 Sometimes iPhone repairs are very expensive. Even if it doesn’t cost that much.

How much does an iPhone battery replacement cost?

The first item is a spare – the iPhone XS battery. The “masters” asked him for 6800 rubles, which, of course, is too expensive. Even if it is really “original”, you would not have found such a price at that time (before the price increase) even in an authorized service center. The two-year battery warranty also raises questions, but that’s not so important in the context of such a cost.

Moreover, its replacement should not cost 2,190 rubles. For comparison, in the Apple Pro iPhone Xs battery replacement costs only 4,900 rubles – including labor, a battery and a replacement waterproof gasket. In other honest service centers, the price will be close.

Get an iPhone repair price

By the way, it is the restoration of the PVZ (apparently, protection against dust and moisture) that is a separate item on the third line, and they ask for another 2300 rubles for this. Protection against water and dust is achieved by sizing the case. When assembling, a special layer is installed along its perimeter, which protects against water ingress. Without it, proper assembly is simply not possible, and good service centers know this. They always include it immediately in the cost of disassembly / assembly work and do not display it as a separate item. So it was possible to take another hundred rubles for tightening the screws of the case and 200 for disconnecting / connecting the power cable and the camera when replacing the battery. 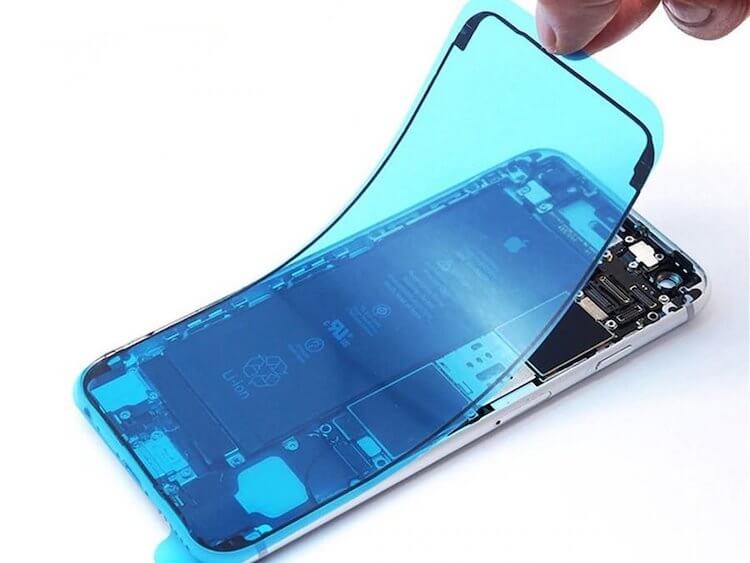 To protect against water, this film is applied to the disassembled phone, then its blue part is removed. A black band remains on the phone around the perimeter, which provides waterproofing.

Besides! The fourth item clears the cache showing up to 50 GB. First of all, this is a procedure that you can do yourself for free and in just 30-40 seconds. In this article, we have described the whole simple process. Secondly, even if this procedure is done for money, its cost should not depend on the size of the cache. This is not a truck with bricks that are unloaded by hand. Everything is literally done with a single button, regardless of the amount of data. You can compare it to emptying the recycle bin on a computer. It doesn’t matter if it’s five 4K movies or one photo. Click “Empty Trash” and you’re done. I’m not saying that 50 GB of cache for a phone is too much.

But the most interesting thing is that this procedure is guaranteed for 3 months. It’s really interesting. I would turn to such “masters” in a few weeks with a request to redo the “work done”. After all, the cache is not a fallen loop, but a living process that occurs when using any electronic device (smartphone, computer, tablet, etc.).

The next point about eliminating the short circuit (apparently, a short circuit) in the upper loop raises no less questions. What exactly they did is unclear. I don’t understand why it was so cheap. Only 3,100 rubles on the bottom of a gasket replacement for 2,190 is unheard of generosity. 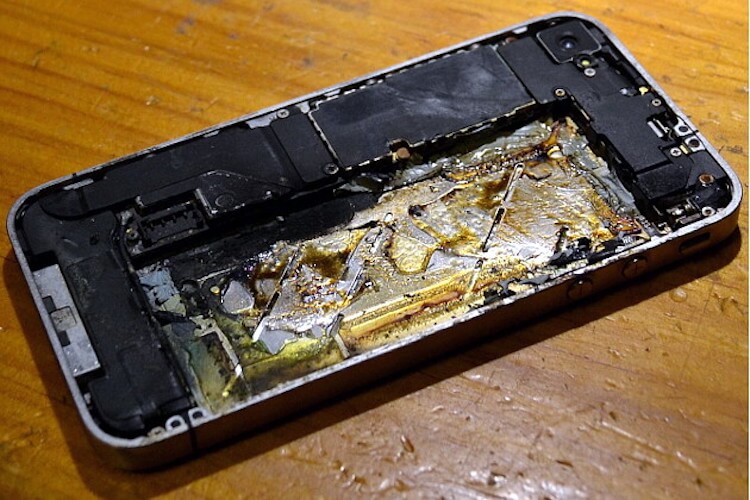 Usually a short circuit looks like this, and not something that can be “eliminated” for a few thousand rubles.

At the end, data transfer and application configuration. There are also questions about what and where they were transferred if the phone did not change, but was repaired. The only spare part, according to the certificate of completion, is the battery. Data is not stored on it and when replacing you do not need to transfer or configure anything.

All this reminds of a joke in which the customer asks the waiter how he got a bill for 1000 rubles, whether the soup costs 200 rubles, the roll 50 and the salad 150 rubles. The waiter replied, “Well, that means it didn’t work.” It’s funny if it wasn’t sad and showing how service centers trick gullible customers who don’t know the technology. Most often this happens during on-site repairs and if you were not immediately told how much it would cost.

But even if a price has been negotiated, “difficulties” may arise that change it. We heard many such stories from specialists of the service center, to which customers came with a request to correct the consequences of such a “repair”. 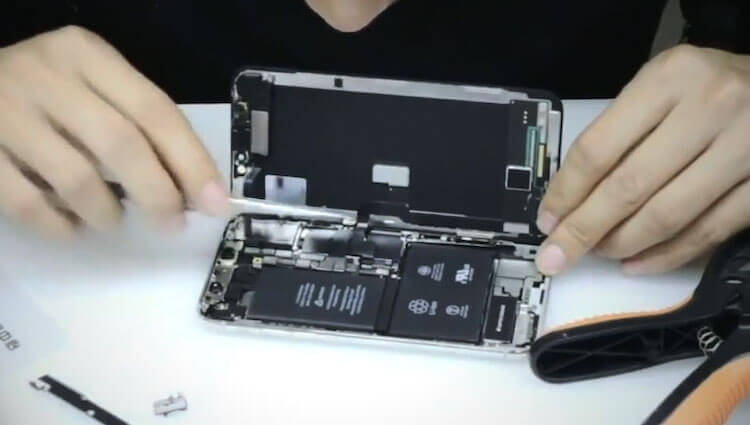 A disassembled iPhone looks very cool, but you should entrust this process to professionals.

Who to trust to fix an iPhone

Trust only proven masters and look for reviews. For example, on Yandex Maps or specialized sites. We trust the guys at Apple Pro, who we turn to ourselves with our gear. But there are also other good addresses. You can even repair the phone yourself by buying spare parts, for example here. Many things are simpler than it seems and do not cost 17,000 rubles.

An unknown object or accessory was found nearby. What to do?

How to Pay on Aliexpress After Sanctions