Several weeks have passed since I started using the new generation of Yandex station 2. It ended up in our editorial office even before the official start of deliveries, then we talked about it quite briefly and only sketched out a few points. I later bought one for myself and started using it full time instead of my first-gen station, which I bought on the first day of sales in 2018, after doing tail. When using the second generation, I realized what the advantages and disadvantages of the new column were, and now I want to share my experience. Moreover, our Ivan Gerasimov previously promised that I would express everything I think about her. 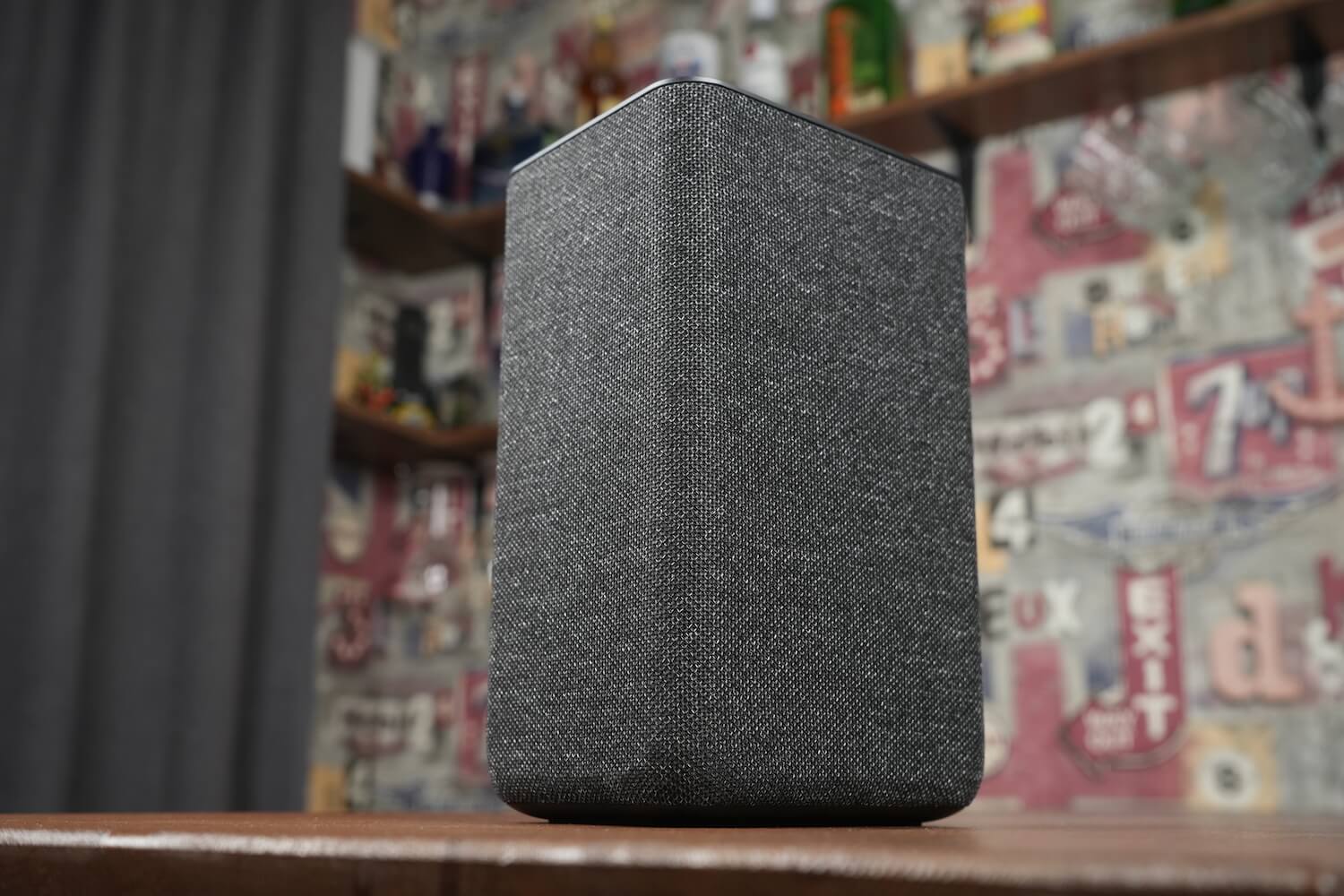 This design opens a new chapter in the company’s loudspeaker history.

It’s good that no event, semiconductor crisis and problems with container transport prevented Yandex from fulfilling the promise made at the end of last year at the YAC. At the time, the company was talking a lot about the second-generation station, but availability was only promised for this spring. The promise was kept – pre-orders started being accepted at the end of May.

How much does the new Yandex station 2 cost?

I note that the best time to buy this column was exactly when it and a set of sensors for a smart home cost significantly less than buying them separately. And now the column is no longer at a pre-order price, which is not surprising – this is common practice. Now the second generation Yandex station can be purchased for 16,990 rubles on its own or for 19,990 rubles together with a set of 4 AQARA smart home devices (more information below). 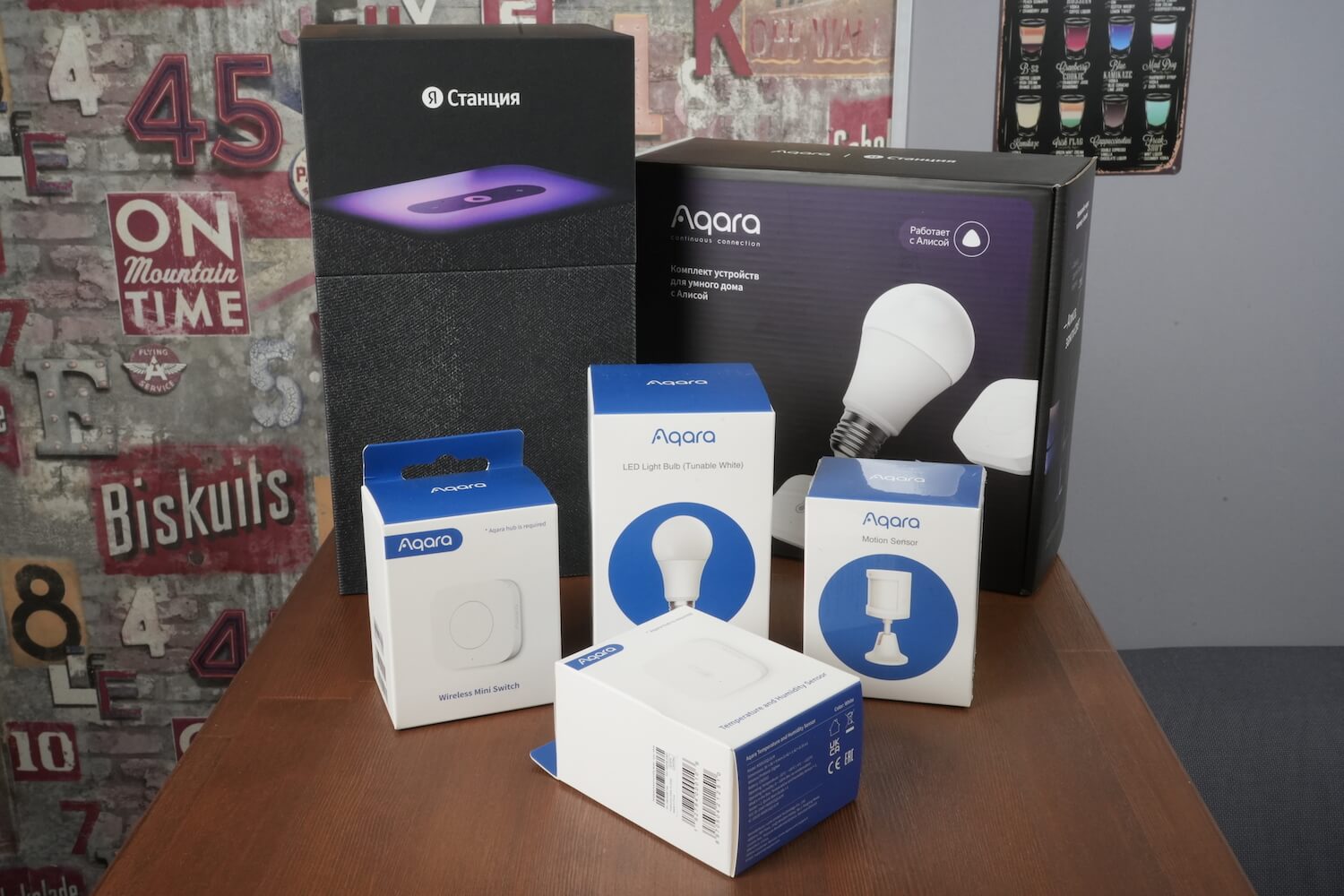 I could not miss such a set, because I always find a place for new sensors. And I will not miss the opportunity to buy them cheaper.

You can also buy the station by subscription. In this case, it will be necessary to pay for three years 829 rubles per month . But for this money you will also receive a Plus Multi subscription, which in itself costs 299 rubles per month. I will not go into detail about its advantages, but it turns out that with such an installment plan, if you subtract the cost of a subscription, the column will end up costing you 19,080 rubles.

Join us on Telegram!

Prices are over! Now let’s move on to the column itself. Externally, she very different from the previous generation . Also, I still can’t get used to the fact that this is a one line product. Front of all large stations were rectangular one small washer-shaped . This product falls somewhere in the middle. And it’s not like the other Stations. 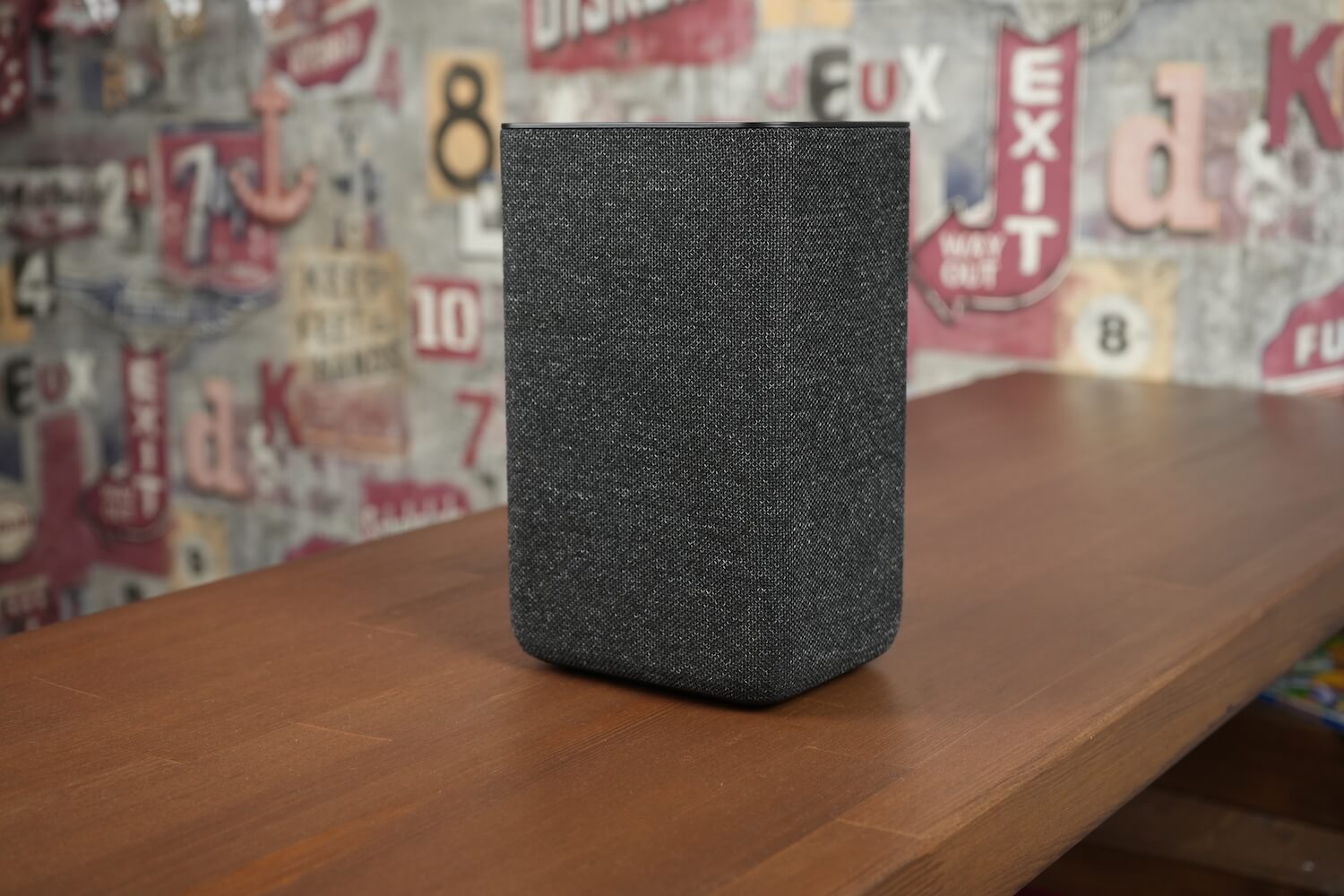 The speaker sounds 360 degrees. It can even be placed in the center of a large room. For example, an office.

The fabric has become rougher but classier , and in the column itself, great attention has been paid to tactile sensations. Even the box has received inserts that resemble the Station itself. The plastic on top of the speaker is very soft and nice, but I was upset that the company ditched the volume button. Touch buttons can also be used, and a large puck would greatly interfere with the implementation of the intended design, but it was convenient and pleasant to twist it. 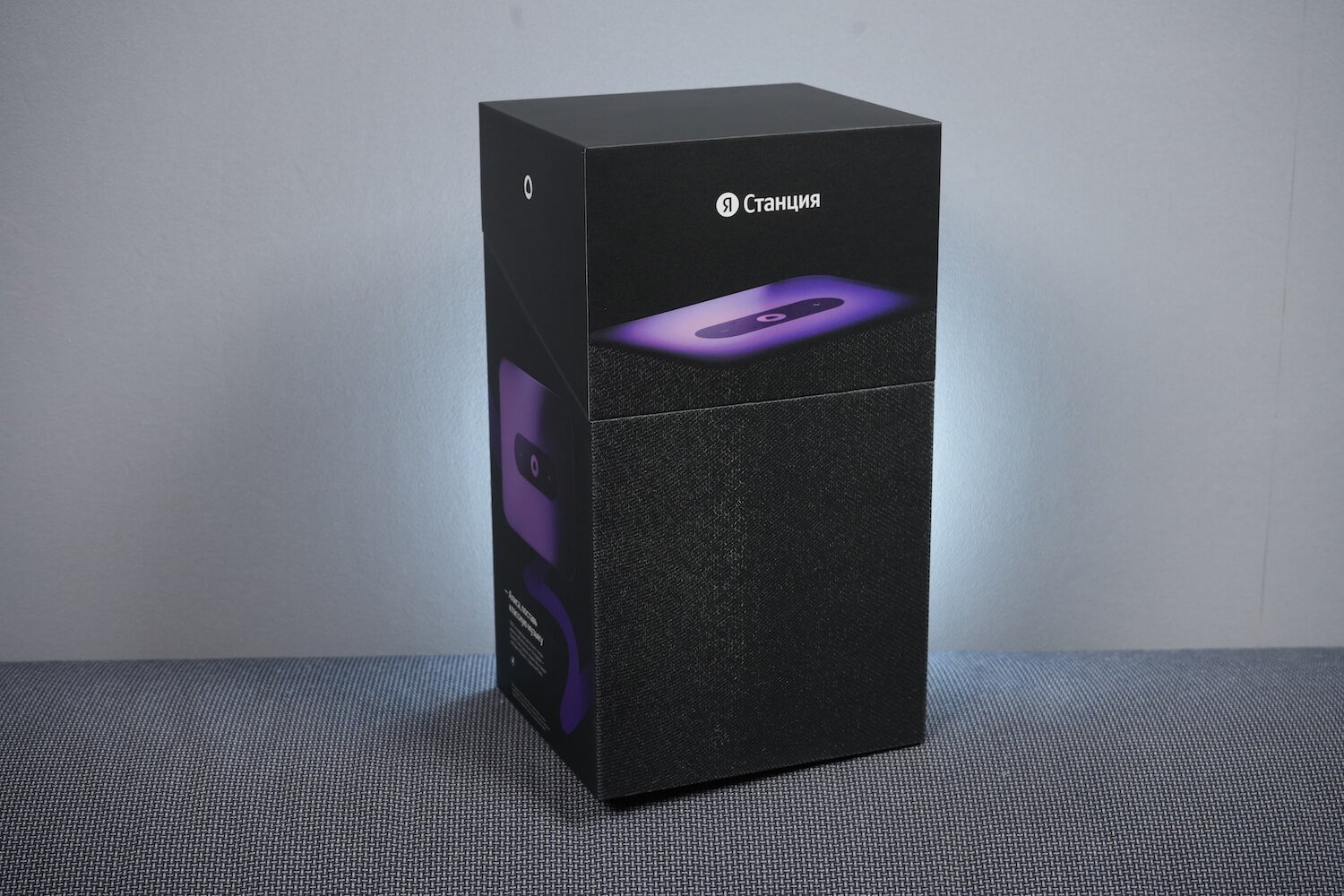 Even the new Station box says they did a good job on it.

In fact, the body remained only one mechanical button – turn off the microphone on the back wall. Everything else is done using the touchpad. You can change the volume, start/stop playback, call an assistant and change songs. 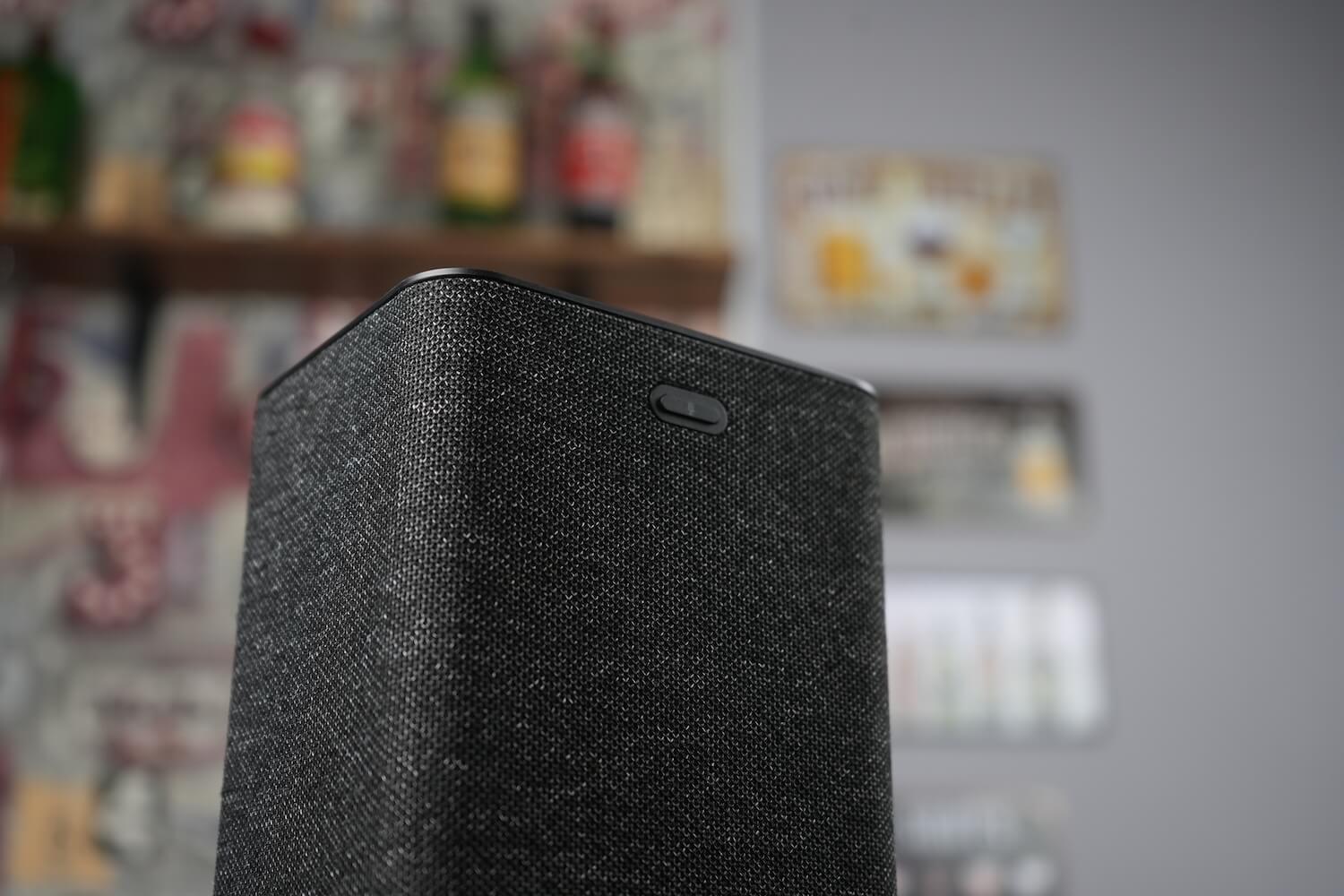 The only physical button on the case.

Remember our Yandex Zen? Come in, it’s warm and comfortable.

Is the touchpad easy to use?

I didn’t use the touchpad much because I couldn’t get used to it quickly. Yes, I haven’t tried because Alice has a nice voice thanks to very sensitive microphones. Even at high volume, you can turn on it without shouting too much. But don’t repeat my mistake. Do not place the speaker next to the TV . I have it under the soundbar, and when the TV is on, it’s very hard to yell at it. Even low sound in close proximity to the microphone easily interrupts the voice. 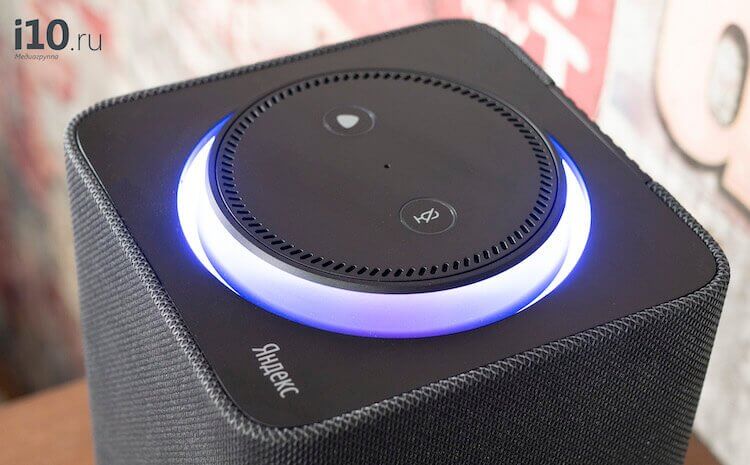 Adjusting the sound by turning the dial in the first generation seemed more convenient to me.

Features of the new Station

Having used the Max Station for a while and having a second-gen Mini Station in another room, I’ve gotten used to the fact that the clock digits are still sticking out from under the fabric. It is very practical and it is a pity that the second generation Station did not have such a function. 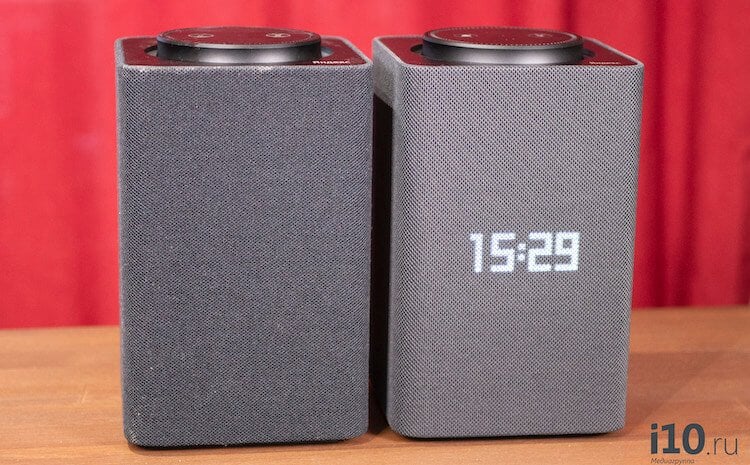 The station with the clock is more convenient (on the left is the first generation station, on the right is the Max station)

But now, the column is powered by USB Type-C, like the more compact models. In terms of power, it’s quite enough, but now you don’t have to look for a special wire, as I had it more than once with the first Station, which I wanted to rearrange, but I couldn’t because the wire was “sewn” into the bedside table, and you can’t open it wanted. But it is better to use the original power cable anyway. By the way, Yandex does not stop marking them, which I personally like very much. 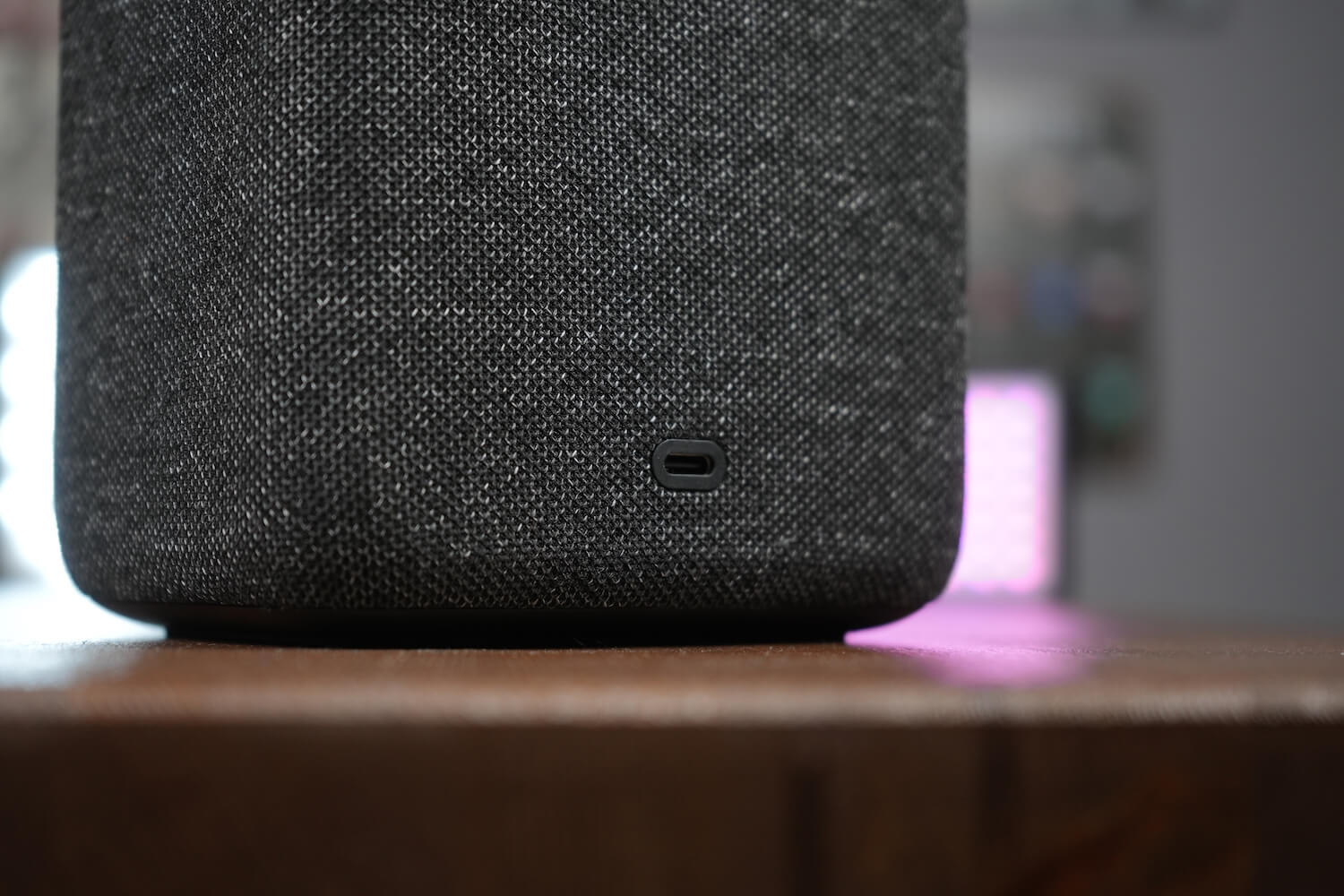 USB Type-C is used for charging.

Light bar on top looks great . At first it looks very bright, but then you get used to it and realize that’s what you need. This panel displays the operating mode, light music, and can even include effects, such as a burning candle. In the normal state, it is disabled. But even during operation it can be forcibly turned off. 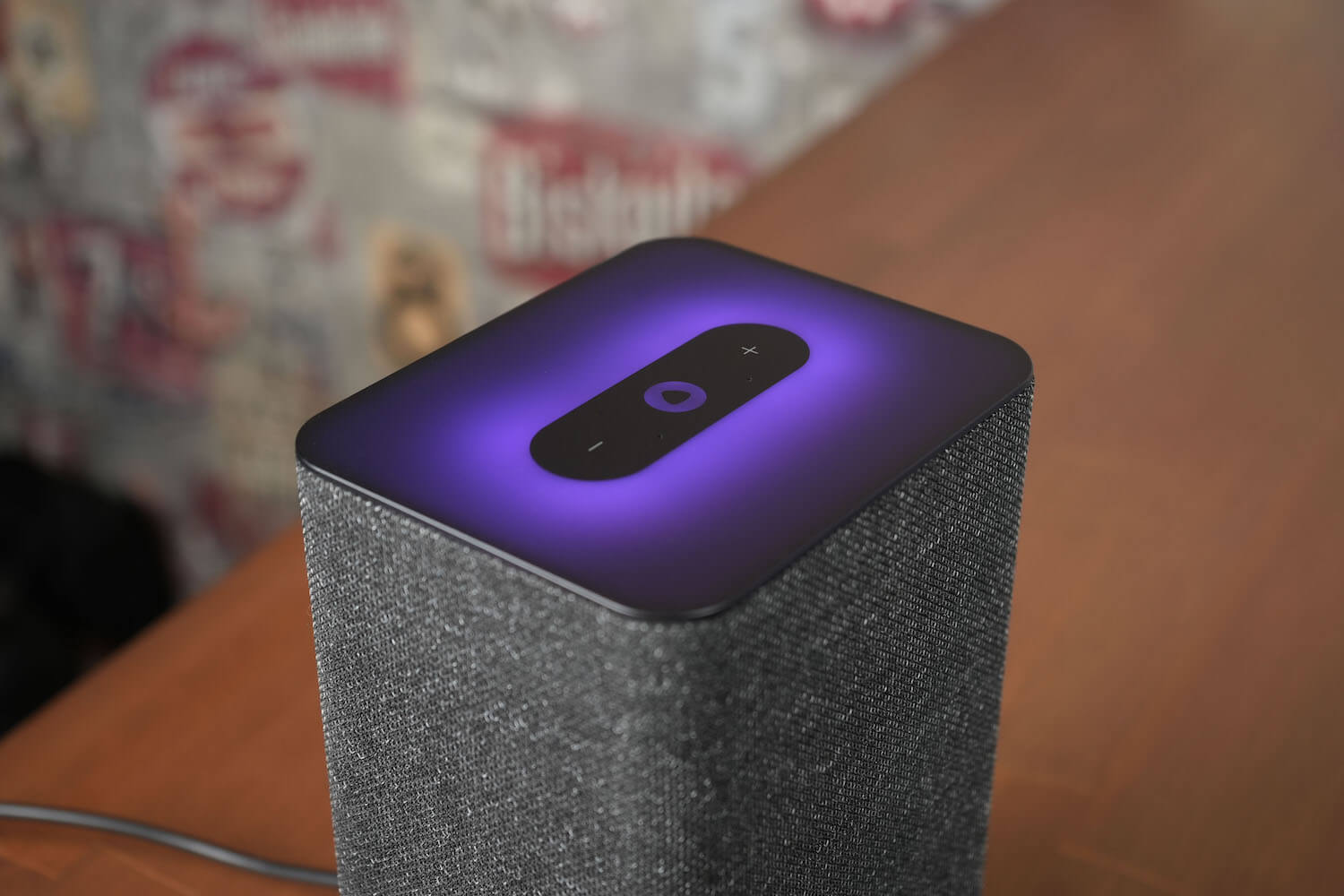 The top bar can display a musical animation or an assistant’s response.

There is nothing else next to the power connector. Those who own the first generation of the Station will remember that there was once an HDMI connection to connect to a television. I’ve barely used it, as I have an Apple TV and the good built-in smart TV features, and choosing content by voice isn’t as convenient as using the remote. Yes, and the sound was only coming from the speaker, and I have a good soundbar with a separate subwoofer, and this set sounds better than the speaker anyway.

Is it possible to connect a new Yandex station2 to a TV?

Now there is a relatively new Yandex module for streaming content to a TV. It can interact with a speaker, but if you want it all in one package, take a closer look at Station Max . Everything will be there under one cover, there will be a remote control, and the price will not be much higher than if you bought a new station separately and added the Yandex module to it.

Yandex The module, a little larger than a few lighters, solves problems with access to Yandex content.

What does the second generation Yandex station look like?

The most important thing in a musical chronicle is the sound. At first, I was a bit surprised that his character hadn’t changed much since the first generation. Although even maintaining the quality while reducing the size is already a great achievement. But delving into the intricacies of the sound a little deeper, I understand what has changed .

The first generation of the station was more powerful, but the sound was just loud. Then the company couldn’t make it really high quality. In general it was sufficient, but the mids detail was lacking and the bass was very poor. With the addition of the equalization function, the problem was only partially solved.

The new station did not receive such loud sound, but the quality is higher . In the mid frequencies, almost everything is fine, but much more bass , especially if you include dance music. I mainly listen to rock, and in my case the difference isn’t that big, but it definitely is. 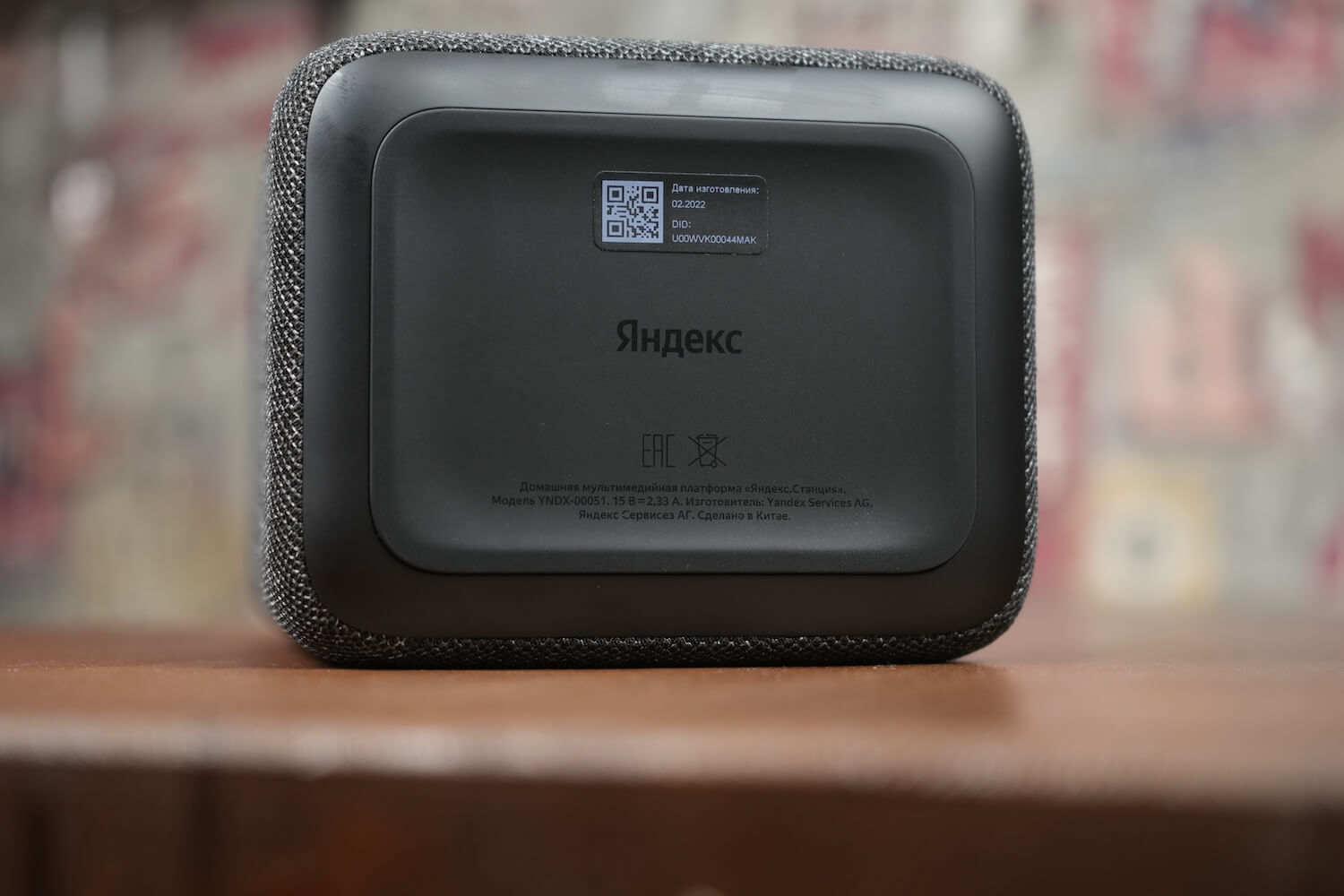 The rubber base adds stability and even improves sound by isolating the speaker from the surface.

Also a column able to adapt to room parameters . To do this, it sends signals and listens to their sound. Sometimes it’s easier to turn this feature off, but generally it’s good to have it there. If you buy such a speaker, try out how it will sound with and without it, and then decide how to use it.

The new station is compatible with some other Yandex columns when building a multi-room system. If you ask it to turn on music everywhere, the sound will go to all supported models. Next generation Station Light and Station Mini worked for me with it. It’s great when you are doing household chores and walking around the apartment. But that only works with music. You can’t listen to radio stations like that.

Having its own voice assistant, and even as powerful as Yandex, it would be foolish not to engage in the further development of the smart home ecosystem. In the Yandex application you can add gadgets from dozens of manufacturers to your account. And they were great with the voice. I have Xiaomi, Aqara, Philips, Roborock, Hiper and a few other products near me that I can control with my voice. 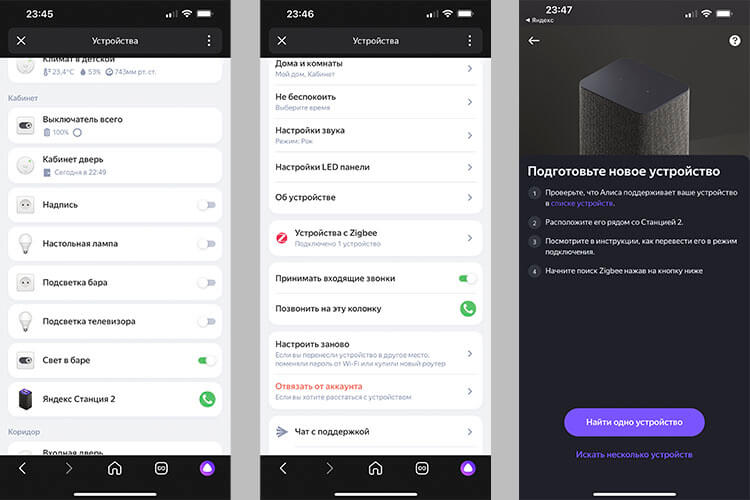 Now Yandex has gone one step further and started selling a speaker with smart home gadgets . The kit includes three sensors and a smart bulb. And all this is not connected to a separate hub, as before (it costs about 4000 rubles), but to the column itself using the Zigbee protocol. Everything works fine, pairing is simple through the Yandex application, there are many supported devices, and there will be even more, but … All this does not work without an Internet connection.

It was this opportunity that struck me as a killer feature for you to control the entire smart home, for example, in the country. But the impossibility of such a connection is logical . Without a more or less good connection, Alice simply won’t understand what you said. Offline, she only processes the request for her name. All other requests are sent to the server, processed and returned in response. It happens instantly, but in offline mode, the operation of the speaker and smart home gadgets is impossible . 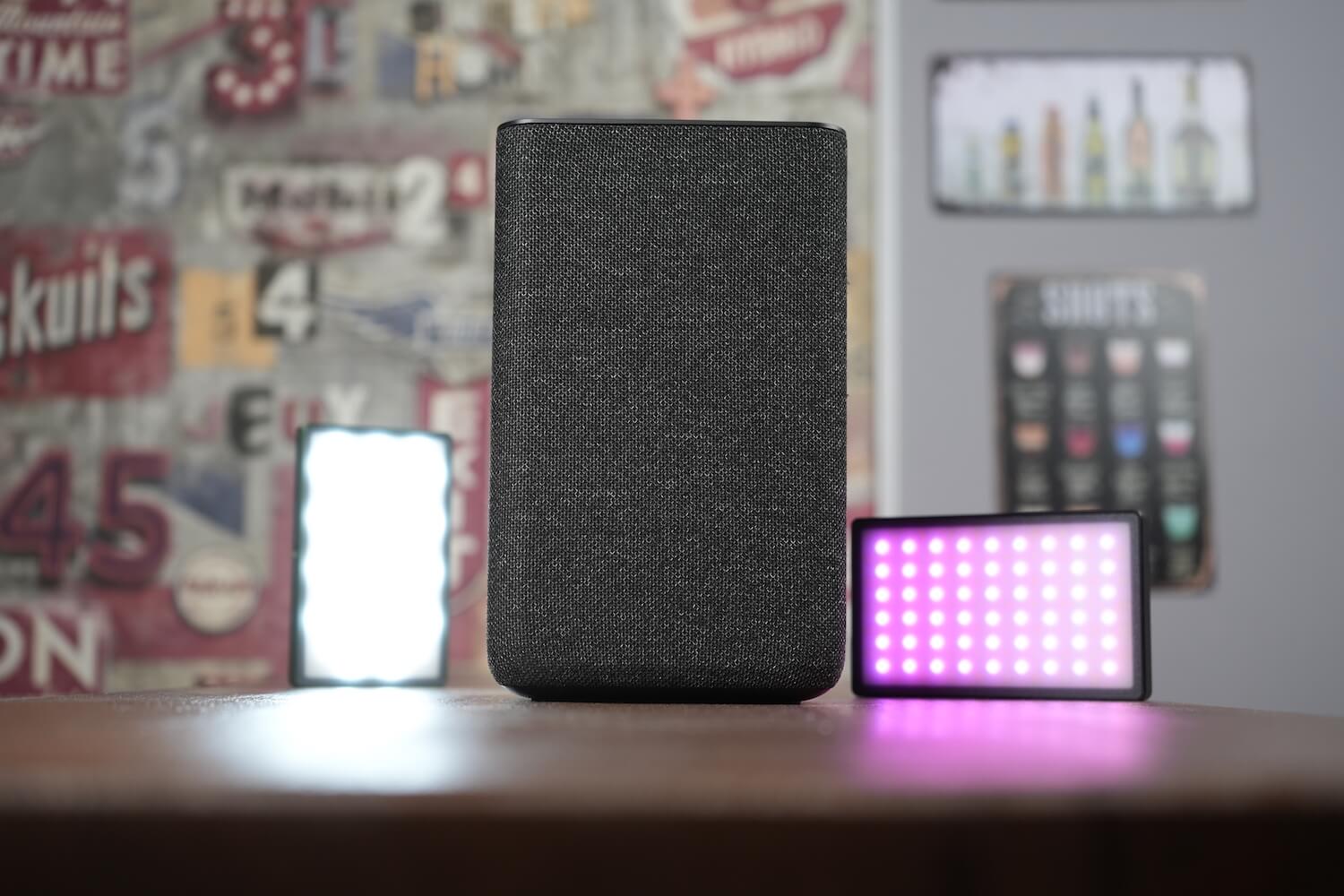 The column will fit into any interior. Also you can choose its color.

Should I buy Yandex Station 2?

Summarizing my experience of use, I can say that the column turned out to be very solid. It really started to sound better, albeit quieter. Top notch appearance and, without exaggeration, will fit well into any interior . It’s good that the company continues to develop the ideas of a smart home, but somehow more functions are needed without internet access. Although I can’t say which ones.

At the same time, Yandex Station Max is still a premium device, which I consider to be the best smart speaker today. It sounds better than HomePod, Alice suggests, and can be used as a set-top box. As they say, everything is with her.

As for the Station that I mentioned above, I can only add that if you want to buy it, it is better to do it with sensors . The price difference is not so big, but it will be more expensive to buy them separately. If you have a smart home, you’ll find where to install them, and if not, give it a try and you won’t regret it.

The 7 best apps to learn Galician from the iPhone

Apple will remove hundreds of apps from the App Store for no reason. And it’s not about penalties