We slowly get used to the fact that iPhone prices have gone up. By the way, the iPad too. If earlier the basic iPad cost about 30,000 rubles (and now may cost less), but now its price starts from 51,000 rubles and reaches 60,000 for the 64 GB version without a SIM card. Cheap iPads are over, and with them the post-PC era. However, only in Russia. Nevertheless, the secondary market is our everything. If you do a search, you can find a used iPad at a bargain price. You can look at older iPad models, but should you buy them? Let’s find out how much does a used ipad costwhich one to choose and whether it is possible to buy a tablet with your hands. 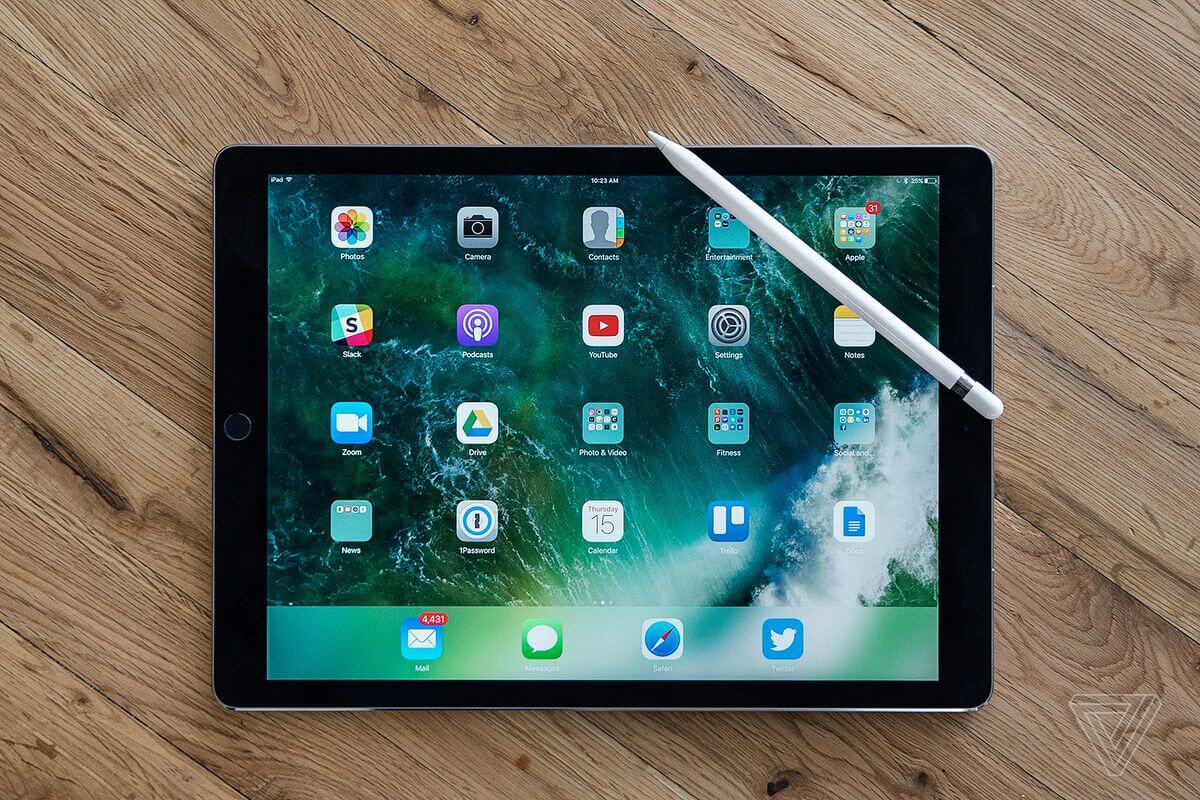 How much does a used iPad cost?

I suggest you consider buying Cheap iPadsfrom the 7th generation (2019). They run on iPadOS 15, have 3GB of RAM and an A10 Fusion chip. Let me remind you that they were installed in iPhone 7, 7 Plus. You should also pay attention to the iPad 8, 9 and iPad Pro 2018. It is also worth paying attention to The new iPad 7 is no longer on sale, you can find the iPad 8 with a half heartbreak, but the ‘iPad Pro 2018 is still on sale and is 75 thousand rubles for the 64 GB version. Let’s see what Avito can offer us. 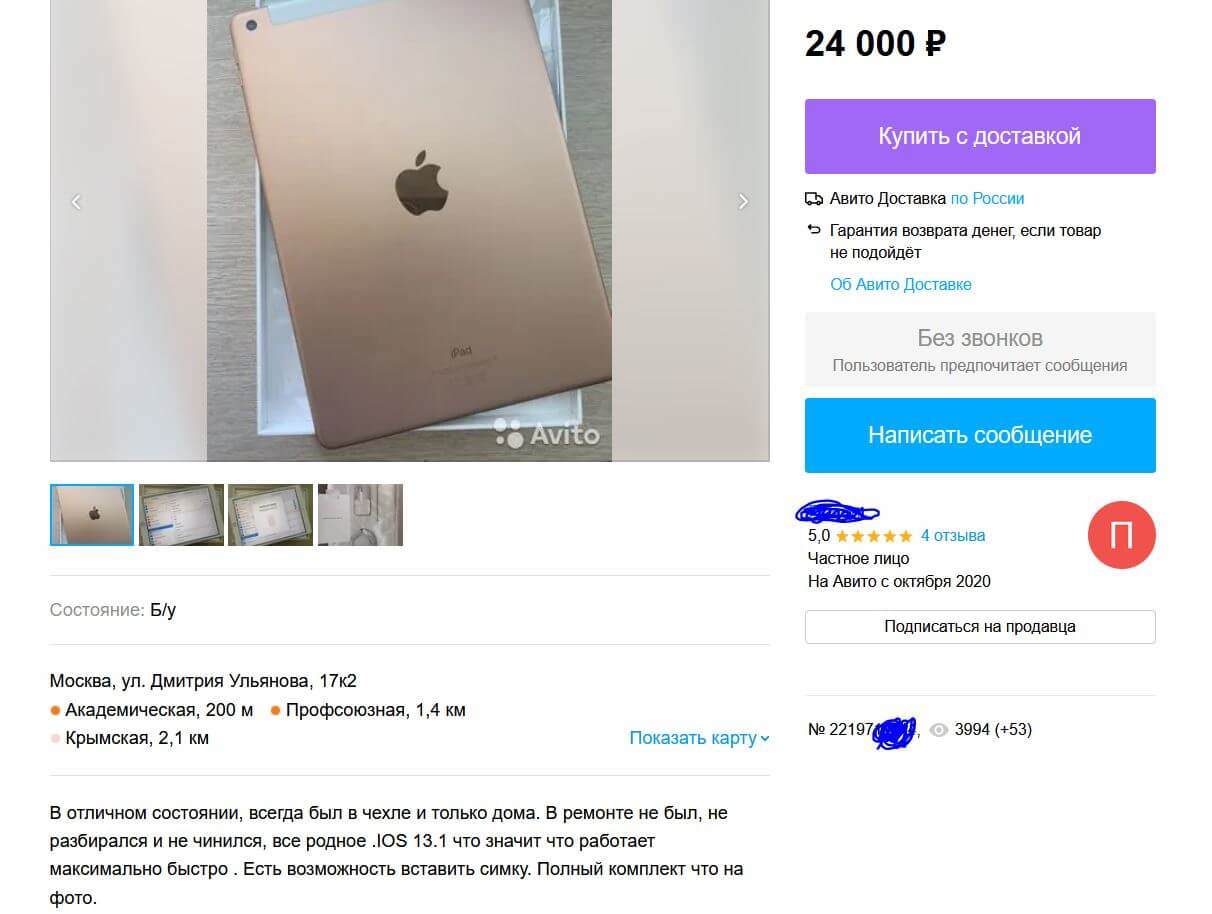 The iPad 7 is an inexpensive option for surfing the web.

Most likely, it will turn out that it will cost another thousand for sure, so you need to focus on this cost. Unfortunately there are very few tablets of this type left, I managed to find a few more: they are all about the same price, if you will iPad in good conditionto cook 23-24 thousand rubles.

iPad 8 – a more relevant model, released in the “pandemic” year 2020. It also has a 10.2-inch screen as well as A12 Bionic. The tablet is two years old, which means it will be good enough for a few more years. It also comes in two flavors: 32GB and 128GB. Unlike the iPad 7, next-gen tablets are aplenty on Avito: the cheaper ones are the first to grab attention. 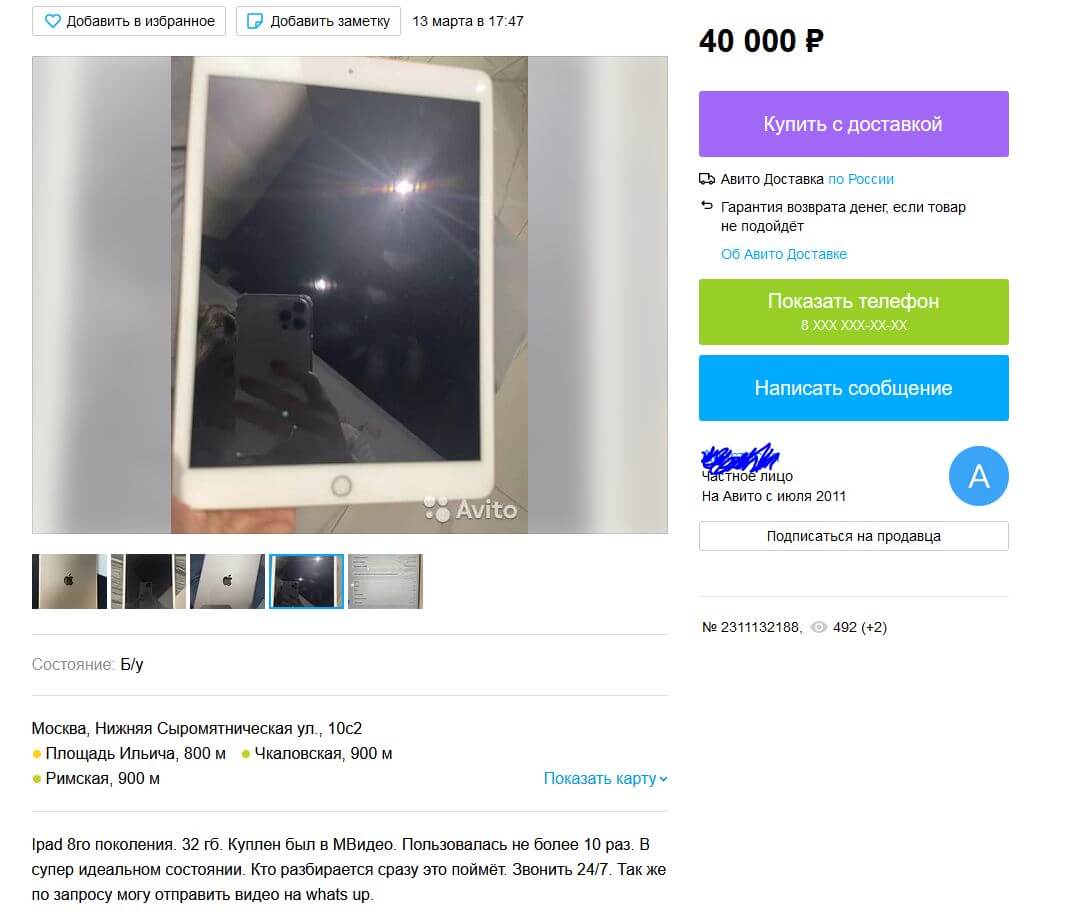 The iPad 8 is a two-year-old tablet, and there are plenty of deals on Avito

Up to 25,000 rubles you can find a 32 GB iPad and Wi-Fi with a small dent, a broken home button, scratches and other flaws. More or less whole options are sold in the region 33-35 thousand rubles (you can bargain), and among them there is even 128 GB. In general, there is also a choice, but it is certainly not worth considering too cheap options. Such an iPad will cost on average to 31 thousand rubles. 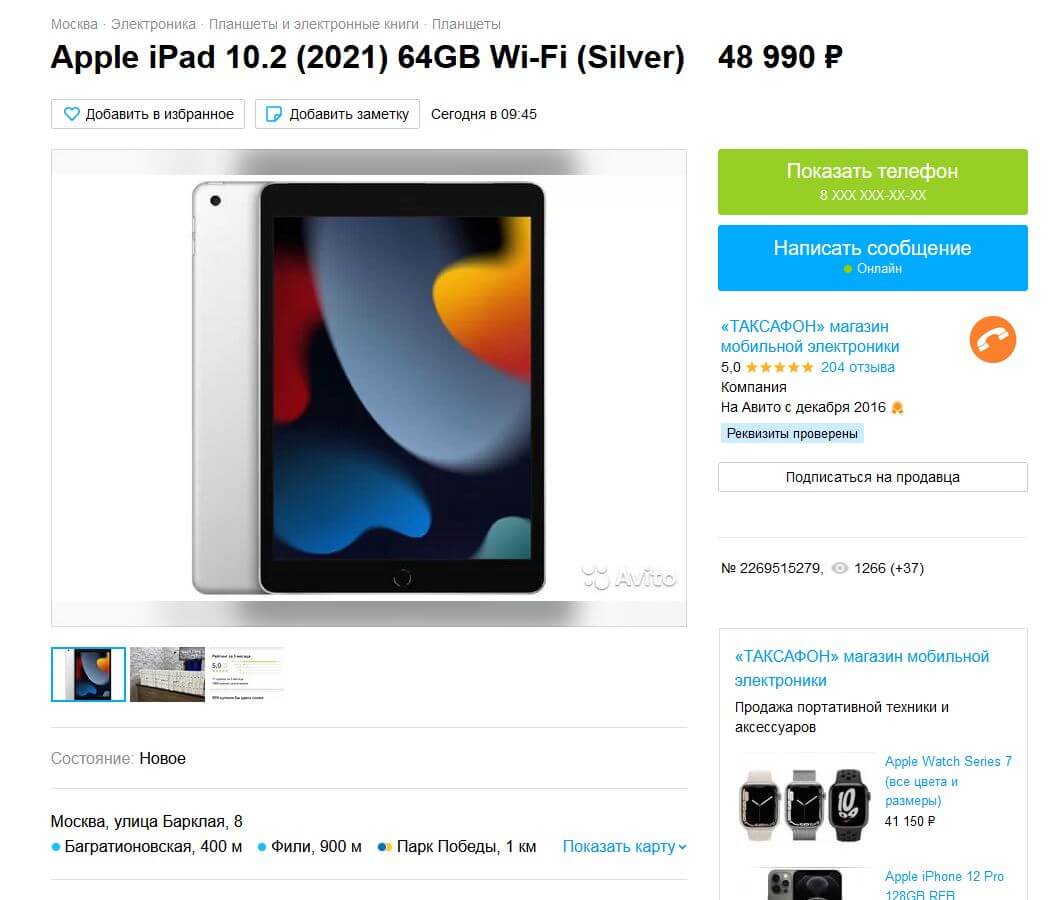 The iPad 9 really sells for that money. Checked on the store’s site – everything is correct

The iPad 9 tablet was released late last year and will cost more than the previous ones. Immediately there is an advertisement for small stores, where the iPad is much cheaper than in the same Yandex.Market – about 49,000 rubles. Mostly from Gorbushka sellers, but they promise a packaged tablet, but not Rostest (because PCT is more expensive). I don’t know about you, but I’ve bought some before and had no problems. There are very few ads with a used iPad 9, but you should focus on 40 thousand rubles.

But with the iPad Pro 2018 with a diagonal of 11 inches, everything is much more interesting: today it is an excellent tablet with a modern design, without the Home button, I was the first to come across options until ‘at 40 thousand rubles, however, almost all with a damaged screen, case, broken pixels, etc. There are also a few ads where it’s just stripes. Judging by the ads, for this price you will get a tablet with 64 GB of memory and flaws. 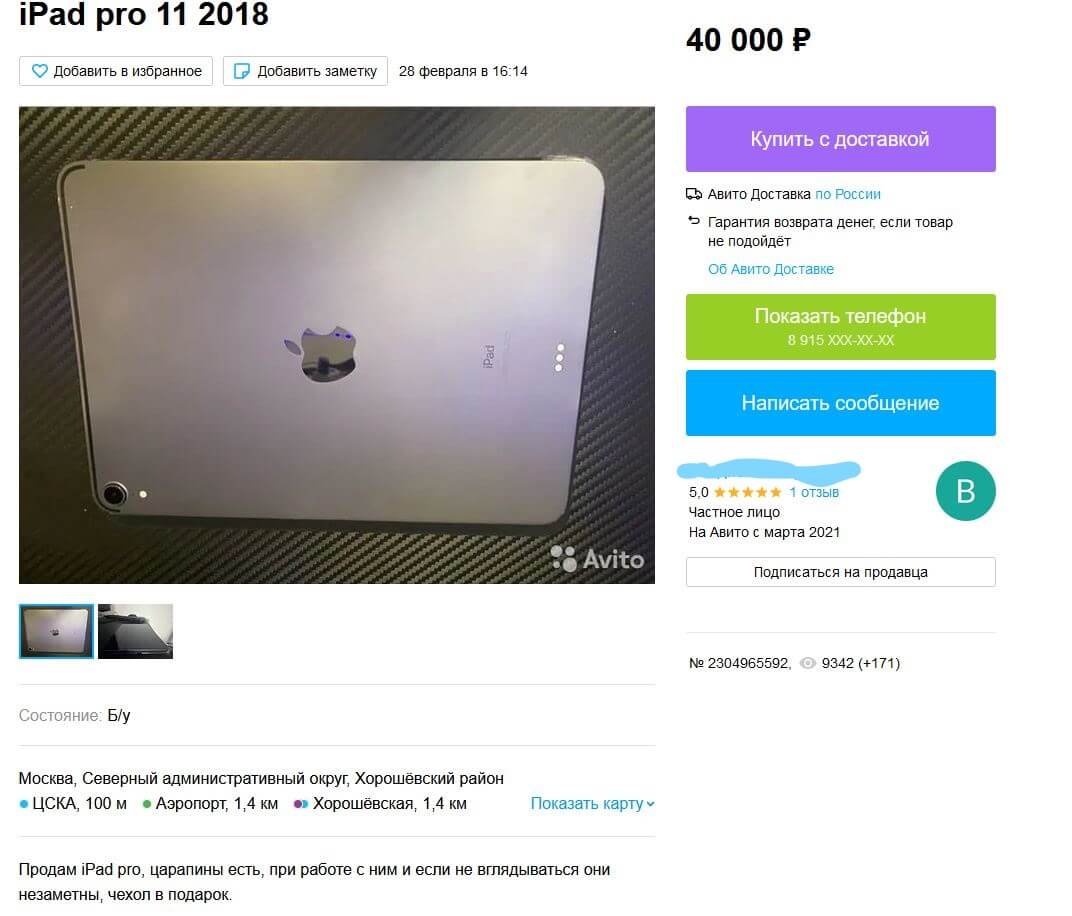 All other models for 256GB and scratch-free chips will cost strictly approx. 60 thousand rubles There is such a big price difference. Let me remind you that in this price category iPad 9 with A13 Bionic is now on sale. Judging by the tests, there is practically no difference in chip performance, and there is also no need to talk about the advantages of the four-year-old iPad Pro over the iPad 9 from Last year. I would take a chance and choose a used 2018 iPad Pro. 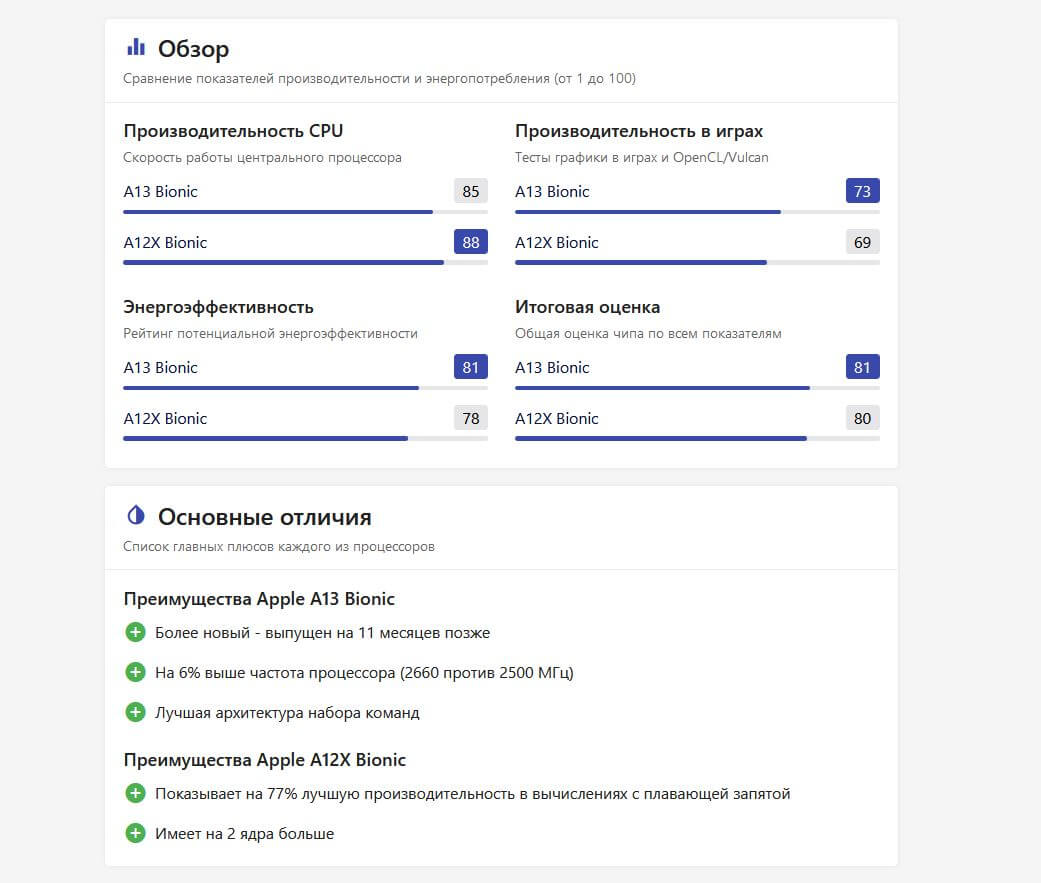 Think, buy used ipad only worth it as a last resort. Of course, there are worthy options, but the prices leave a lot to be desired. Most likely, there will be no further price increases for tablets, and after a while they will begin to fall. However, now you know exactly the rough picture of the tablet secondary market and can draw conclusions for yourself.

How to Move Contacts from iCloud to Google

What about games leaving Apple Arcade?