your last Apple device – iPad Air 2020 – I bought a little over a month ago on February 24th. I bought it so that you understand why. It was decided urgently – the word “invest” is not very appropriate here – to attach the existing liquidities in national currency, which promised to depreciate seriously. As a result, when a week later the dollar rose by more than half, I very much welcomed this foresight and the timely emptying of the rapidly depreciating ruble. However, after a while I started to regret my act and decided that this was probably my last gadget with an Apple logo. Apple Technology Awards have always been quite high. Not only in Russia, but in general everywhere. If we are talking about buying full-fledged devices like the iPhone, iPad or Apple Watch, then you should be prepared to shell out about 50,000 rubles, and if you need a MacBook, then hundreds are not enough not. Especially now. Accordingly, the most logical thing – and I followed this rule – to buy such things in installment plan. There are almost no more normal installments in Russia. All they offer you is either an overpayment loan or an installment plan with the obligatory purchase of accessories for 15-20% of the cost of the goods.

Everything would be fine, but today payments in Russia almost gone. No, in some places they still exist, but the conditions under which they are dispensed are far from being as favorable as before. In Svyaznoy you need to buy accessories for 10-15 thousand rubles. Yandex.Market lends interest-free only for a month and a half. Therefore, it has become more difficult to buy something from Apple according to the old scheme today.

Despite the fact that the stores almost no longer offer profitable installments for one and a half, two and three years, there are still options for splitting the payment over at least 10 months. This payment card “Halva” from Sovcombank And Tinkoff credit cards. With them, the purchase becomes a little more comfortable, since they allow you not to pay the entire amount at once. But think about the prices. Macbook Air, which before the crisis cost 90,000 rubles, today at best it is sold for 150, and AirPods Pro, which could be torn off for 13,000 shares, are now valued at 25,000 or more. And that’s what happened to almost everyone. Apple products. It’s that the iPhone 11 is an exception to the rule and continues to be cheaper. Today, its price is just over 50,000 rubles.

Maybe in the future I will change my position on this issue. But today Apple Technology Awards – even official, even gray – they don’t fit me at all. Therefore, I prefer to put my money elsewhere, even though I fear for its value, than to spend on products with the Apple logo.

Will the App Store be blocked in Russia

Apple services are what I and millions of people like me love the company’s proprietary gear for. Apple Pay, iCloud, Apple Music, Apple TV+ and many other services have formed what we call an ecosystem. But today this concept, if not completely disappeared, at least has lost its former meaning. Take at least Apple Pay. Disable as they say, in secret and depriving millions of Russian users of a contactless means of payment – this is beyond my understanding. No, of course, I am aware of the cancel culture and understand that now Apple is actively “cancelling” us in all respects. But why frankly hurt people who trusted the company and paid for their devices, a lot of money, by the way.

FROM App store the situation is a little better. Apple’s App Store no longer allows old-fashioned payment, and may soon completely get rid of payment methods available to Russians. Therefore, all other paid Apple services through the App Store will also remain out of reach. But the catalog can be completely disabled. We have already analyzed in detail that such an opportunity is being considered at the moment, and it is possible that the decision will not be made in our favor.

In short, then App Store and Google Play in Russia have not yet been extinguished for a single reason. Companies believe that through software stores, local users can access alternative information through foreign media apps. But since many of them are already blocked in Russia, Apple and Google will soon have no reason to support the work of their catalogs in our country, which means that the risk of their closure remains.

What does this mean, I think, and you understand. Without the App Store, your iPhones, iPad and Apple Watch will turn into useless calculators with a camera and internet access. Perhaps a jailbreak could partially fix the situation, but, as for me, buying a smartphone for 100,000 rubles, and then hacking it – well, that’s it. 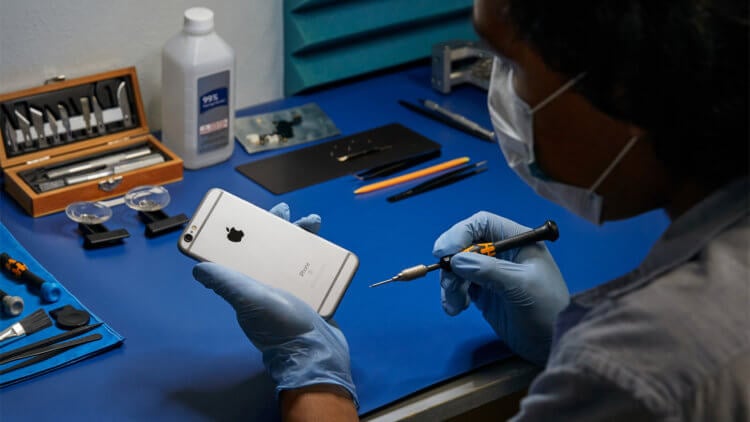 Fortunately, an absolute minority of iPhone, iPad, and Mac users had to contact Apple Service Centers. Still, the company’s devices have a high level of reliability and quite rarely fail on their own. Therefore, most often the warranty provided by the manufacturer remains unclaimed.

But imagine that you damaged your iphone screen, broke the charging socket or, more likely, “wore out” its battery. It is logical that previously you contacted an authorized service center. Now this can also be done. But, judging by official reports, Apple stopped supplying not only its devices to Russia, but also components for their repair.

As long as stocks are still available. But 3-6 months will pass, and you and I will be faced with a situation where there will simply be no spare parts, if Apple will not close its ASCs before. That is, we will have to repair our devices in basement workshops by self-taught specialists using fake components. And what it is, I think, you yourself know.

At best, your iPhone will simply have a Chinese spare part with an unknown lifespan that does not meet the necessary security requirements, and at worst, iOS will simply block it. After all, many components require calibration upon replacement. This applies to screens, Face ID sensors, Touch ID scanner and even batteries. Moreover, Apple often sets the calibration requirement after the fact, and then the already replaced parts are simply switched off, turning the smartphone into a brick.

Using a stolen iPhone will become more difficult. Here’s what Apple came up with

Apple’s MagSafe charger has a big discount on Amazon

If iOS 16 is like this, then I’ll change my mind about selling the iPhone

How to Disable or Remove Your Apple ID from a Computer, iPhone, or iPad